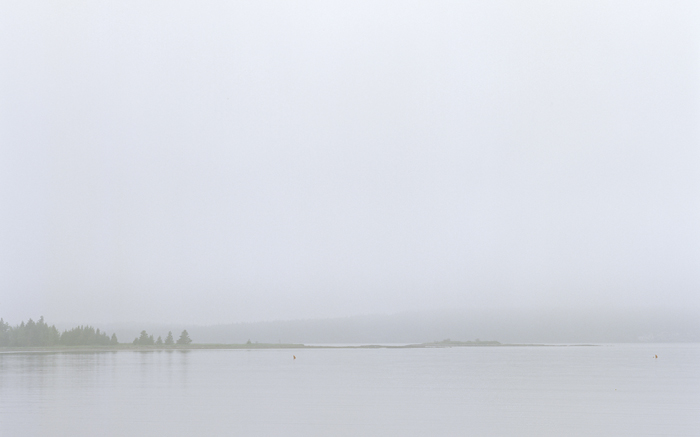 In the experience of fog, which is often the experience of Kingsburg, a coastal village in Nova Scotia, it is not unusual to feel isolated, the only person alive, lost to everyone as clouds descend all around you, only the sound of the ocean, and the wind, reaching you.

This series of photographs by Kingsburg resident Mariëtte Roodenburg was inspired, in part, by the intriguing possibilities for beauty in her foggy surroundings. The text alongside her images – also inspired by fog – are passages adapted from Safe Haven, a new book by Larry Gaudet, who lives in Kingsburg during the summer.

Both Mariëtte and Larry’s project were undertaken at the same time, without any knowledge of what the other was doing until they were nearly done. It was then decided to do this show together. Both would like to believe that it’s more than coincidence that fog found a way into their work – not just a scenic backdrop, but as a leading character with many secrets to share.

This story begins in fog, and that’s where it will end. At best, lucidity is cyclical, and wisdom not so much a destination as an unexpected interlude along the path: a sunny moment when the jungle gives way to the river view, or the steep mountain trail opens upon a plateau, inviting consideration of the huts and smoking chimneys in the valley.  So let us not belabour the scary opaqueness in arrivals and departures, the lies we tell ourselves about how we got here, or where we’re going after it’s all over. Let’s enjoy the journey itself, the sweet panic between the beginning and the end. (Larry Gaudet)